The greenhouse was built in 1840 by an ancestor of Priscilla’s and was mostly used for early vegetables and house plants. It survived well until the big storm of 1987 which caused considerable damage, particular as it had the old fashioned small panes of glass held in place by putty.

On the day of the storm the wind speed at Chivenor was measured at 134 mph. We lost most of the glass, the whole structure was moved forward by about 4 inches to the edge of its base and large parts of the building were very badly damaged. We were very lucky in that we were able to find Robin Bonds, a very skilful, helpful and imaginative builder who lives in Braunton. He and his excellent team were luckily able to start within ten days. It was decided to use large panes of glass cushioned by a layer of rubber fixed to the struts; every fourth column had slides for acrylic panes, which allows repairs to be carried out on the outside from the inside. The slides could also be opened to provide additional ventilation in the summer. 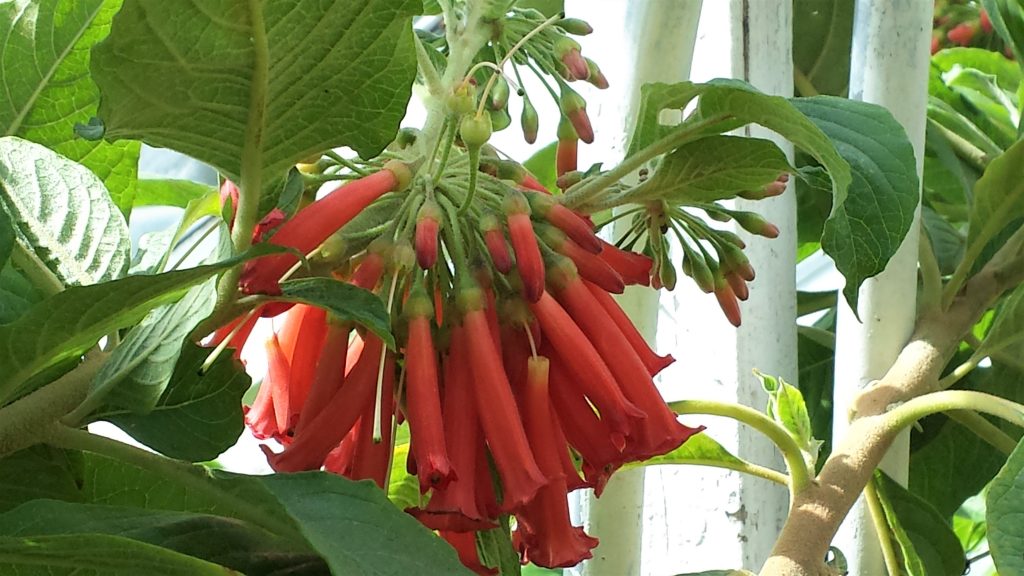 We came to the conclusion after the storm that rather than just grow vegetables it would be fun to do something different and exciting in such a building. So we decided to turn it into a home for tender and the more unusual semi tropical plants; in those days the winters were much colder and it was only possible to turn one of the three sections into a frost free zone. We changed that about ten years ago and now it is all frost free.

Vertically, there are four layers in the greenhouse; in the West and Middle areas most layers have two deep beds but in the top layer the second bed is replaced by boxes. The building is divided horizontally into three different areas; in the West (Left as you look at it) side are most of the better known tender plants and in the Middle there are some slightly hardier ones. The East (Right as you look at it) side, where there is a grape vine, is cooler except for the top layer around which we have fixed another layer of insulation, in fact acrylic under the glass, thus producing the warmest area for the more tender varieties of plants. 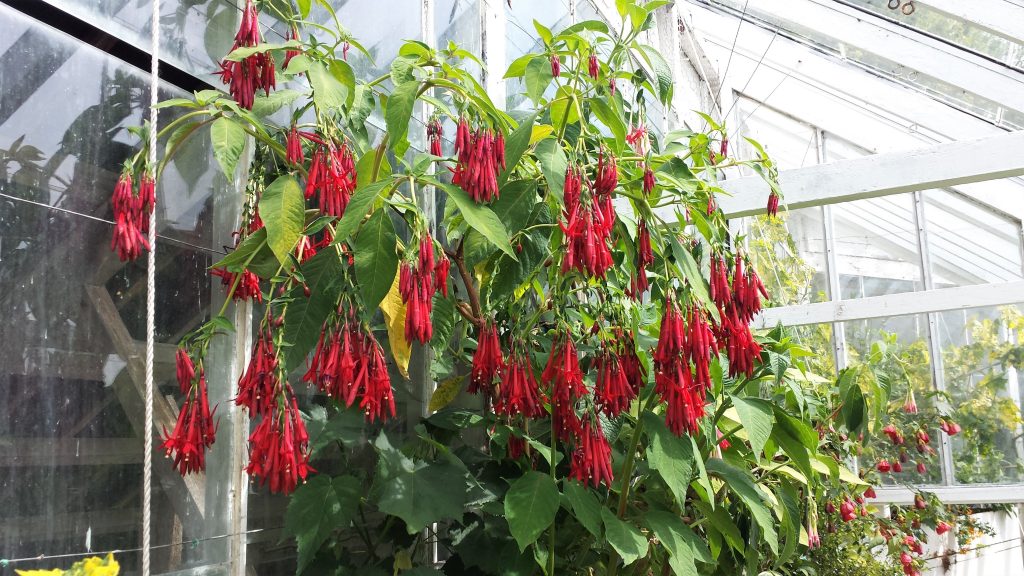 The heating used to be provided by three fires with large hot pipes circulating around the building; now we have moved on to gas fires. Irrigation is done with pipes into which little holes have been drilled, each layer having its own control tap. Ventilation is provided by windows at the side and bottom, by vents high up in the back wall and as I mentioned by long acrylic slides in the front part of the lower roof.

We have tried to divide up the pictures, under which there are a few comments, into Sections in what we hope is a fairly logical manner taking into account the part of the world from where the flowers originated or where they are mostly found now.

You can see the full list of flowers in the Greenhouse, by clicking on this link – view the list.

If you visit you may not find all the plants listed for the reasons I explained on the Home page; in addition however we have kept certain pictures of plants that have died as we thought were really too beautiful to throw away and we are on the lookout for similar ones.

When looking at the pictures you can view them at maximum size by clicking on the picture which opens up a slide show for that Section. You can move from page to page using the arrows underneath each picture; the white cross on the top right of the each picture takes you back to normal viewing.

The general criteria for plant selection to the Greenhouse are bright colours, flowering between March and October, tender and in some cases unusual. If any expert, which we are not, should visit this site and notice absentees that fulfill the criteria laid down above, we would be really delighted to hear how from you as to how we might enlarge our collection. Please be aware that availability of space will always be a problem.

When looking at the pictures, you can view any of the sections listed by left clicking on the tabs below. You can see the photos at maximum size by clicking on the first picture, which opens up a slide show for that Section. You can then move from photo to photo using the arrows below each picture; the white cross on the top right of the each picture takes you back to normal viewing.

(mostly from the Canary Islands)

Back To Top
The Garden
Home